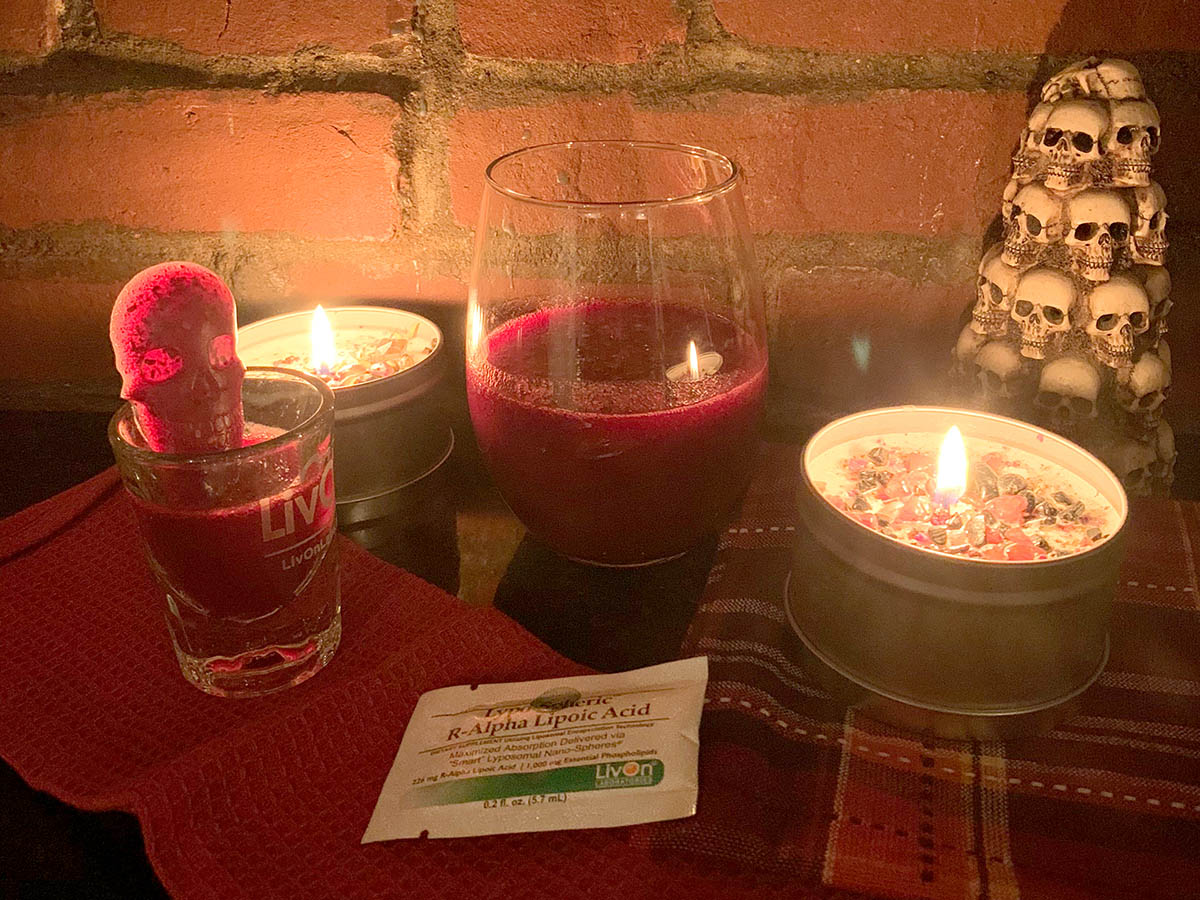 History is polluted with macabre incidents of people trying to preserve their youth through nefarious means. This skin drink provides a better, less bloody way to prevent premature aging.

In the late 16th century, Hungarian countess Bathory was imprisoned for the murder of hundreds of servant girls. It was alleged that she bathed in their blood to absorb their youth in her skin. In all of the Enlightenment and beyond, no scientists have proven the hypothesis that transdermal blood absorption prevents wrinkles, sagging, crepey texture, or even bestows upon the bather the elusive “glow.” Not to mention the ethical implications of coming upon enough young blood to fill a tub.

Luckily, there is a better, easier, morally sound, and scientific way to prevent premature skin aging: Nutrition. Vitamins, minerals, and other compounds in foods absorb from your gut into your bloodstream where they are distributed to the cells that need them. If her servant victims were properly fed, Countess Bathory may have been ahead of her time, demonstrating at least a primitive understanding of how nutrient rich blood can be. Of course, it would take centuries after blood-obsessed barber surgeons went the way of the dodo for those in the field of medicine to understand the reasons for aging skin are not just on the outside. It’s not just the sun; what happens inside your body can damage your skin from within.

The ingredients in this rich, red beverage and its accompanying homemade gummy are loaded with nutrients that have clinically demonstrated their anti-aging properties. Two banal processes in your body can be nefarious when they get out of control, like a countess who just wants to look as young as her handmaidens, and inflict major damage to your skin: oxidation and glycation. How many servants would have been saved if Countess Bathory knew that certain nutrients can prevent these processes from proliferating and mitigate the damage their end products cause?

When an atom, ion, or molecule loses one or more electrons in a chemical reaction, oxidation occurs. It’s a necessary part of several processes, including metabolism. Without oxidation, your body wouldn’t be able to convert food to energy. It’s followed by reduction in which the molecule, ion, or atom gets a replacement electron, changing it back from a free radical/pro-oxidant/oxidant to a productive component of your body. Often these electrons are supplied by antioxidants, molecules that have an extra electron. Equipped naturally with substances like alpha lipoic acid, carnitine, glutathione, and superoxide dismutase, your body has ample antioxidants to reduce molecules oxidized by standard reactions that keep you alive.

The problem is excessive oxidation caused by mass influxes of free radicals without enough antioxidants to reduce them. Without reduction, free radicals destabilize more molecules, creating an army of electron-stealing micro-villains that can inflict massive damage to healthy cells and tissue, suppressing the immune system and weakening organs like the skin. There’s a reason you associate excessive UV radiation exposure (from sunbathing and tanning booths), smoking, large intakes of sugar and processed foods, and chronic alcohol and drug use with prematurely aged skin: they all generate massive amounts of free radicals.

It’s not just those unhealthy activities. Psychological stress generates free radicals. So do environmental contaminants that you may not be able to avoid. To prevent the free radical-antioxidant imbalance of oxidative stress, exogenous antioxidants are a must.

Vitamin C — like in the apple, beets, and lemon of this recipe — is a powerful antioxidant that your body doesn’t produce on its own. The polyphenols in honey, which sweetens this beet- and apple cider vinegar-filled beverage — are also antioxidants. For an antioxidant dose that Countess Bathory would have killed for (had she understood that what happens inside the body doesn’t stay on the inside), we spiked the skin drink with a packet of Lypo-Spheric® R-Alpha Lipoic Acid. Yes, your body produces alpha lipoic acid, but in small amounts that may not be enough considering for amounts of sugar we consume these days. In addition to neutralizing the free radicals produced by excess sugar intake, alpha lipoic acid is critical to sugar metabolism. Numerous studies have demonstrated its support of blood sugar health, which can limit glycation (see more below). By addressing both a root cause of free radicals and the free radicals themselves, alpha lipoic acid is becoming one of the most sought after skincare nutrients.

When you consume excess glucose your body can’t use for its primary purpose (creating energy), it binds to proteins and forms Advanced Glycation End Products (also known as AGEs). By damaging proteins like collagen and elastin, which leads to sagging and wrinkled skin, AGEs age you. According to author and skin health expert Dr. Trevor Cates in her book Clean Skin from Within, “Consuming sugar, or anything that turns to sugar in the body, increases glycation. Other foods, depending on the method of preparation, may contain pre-formed AGEs.” These AGE-filled foods include cooked meat. Since the Rosemary’s Baby Diet is only a slight step up from the Bathory Bath in the macabre department, eschewing added sugars and consuming nutrients that block glycation are more practical options to minimize AGEs.

According to Cates, acidic substances, like the apple cider vinegar and lemon juice in this recipe, can help reduce AGEs. Research has shown Alpha Lipoic Acid to inhibit AGE production while Vitamin C supplementation has been shown to reduce serum glycation. Apples and beets, the gory guts of the Better than Blood skin drink, contain the latter two vitamins.

As the body’s most abundant structural protein, collagen plays many significant roles in the body, its most notable being skin firmness. Collagen supplements are a booming market these days, and while they seem totally safe, there is no guarantee the collagen powder will reach the dermis where it will keep skin tight and young. It may wind up in your elbow cartilage or your tibia. While these parts of the body need collagen to keep joints working, and prevent injury and pain, Countess Bathory would likely be quite upset that no one would be able to appreciate her youthful shins.

Skin, bones, and cartilage cells are constantly producing and using collagen. Natural collagen production declines with age while our demands for it increase with exposure to free radicals and other unavoidable environmental insults. The body can’t keep up with the demand, and it starts to show on the skin. Instead of bathing in blood, Countess Bathory would have been better served sucking down Vitamin C-rich Bloody Marys. Vitamin C is a necessary ingredient in the collagen production cycle, which along with its antioxidant function, is why it’s become a skin care staple.

Gelatin is little more than collagen, which is why we made these tasty, Vitamin C-packed gummy skulls to accompany the Better than Blood skin drink.

How to Make the Better than Blood Skin Drink

END_OF_DOCUMENT_TOKEN_TO_BE_REPLACED

Did you take your vitamins today?⁠ ⁠ #vitamins

In 2021, I resolve to follow a morning routine lik

Have you entered the B Complex giveaway yet? If no

In 2021, I resolve to put my health on the offensi