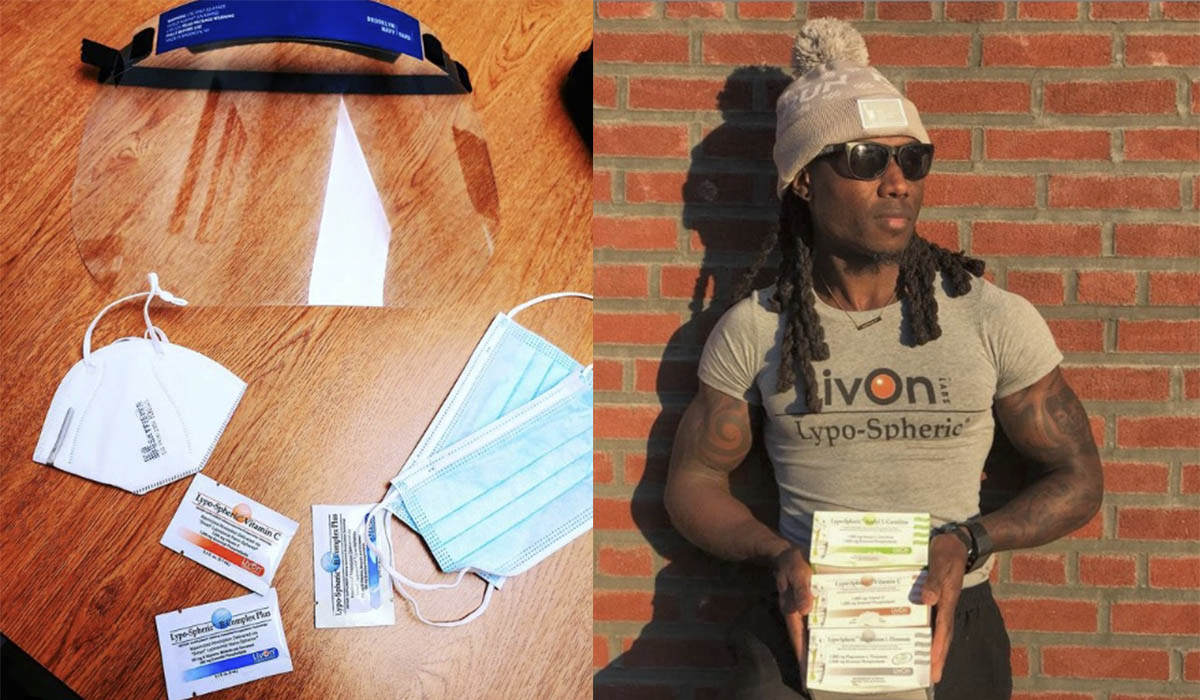 Chinedu Ogueri didn’t wait for a global pandemic to center his life around health. The pediatric/geriatric nurse and marathoner often starts his day at 5am with a 3–6 mile run to stay mentally and physically healthy. Morning runs aren’t a chore or an obligation. They’re part of how Chinedu is “trying to maximize as much healthy living as possible.”

After a post-run hot shower, Chinedu cooks his breakfast, packs his lunch, and pops some Lypo-Spheric® Vitamin C and Magnesium L-Threonate. Home cooking healthy meals is a priority for the marathoner with a parental history of high blood pressure, specifically a father who didn’t prioritize healthy eating or an active lifestyle. When Chinedu was a senior in high school, he commented on his father’s plate of bacon. “Can I live?” His father asked. Apparently not for much longer. The next day, he was dead from a heart attack.

That tragedy isn’t what launched Chinedu’s lifelong commitment to health and fitness. Competing in track did that. As a high school freshman and runner, he realized that a healthier diet was vital to his performance on the track. His passion for running spurred other improvements.

“It helped keep me focused on school work and helped me break out of my shell. I was always a shy kid and running gave me a voice,” Chinedu says. Now he’s part of Adidas Runners NYC, a running group which met on a regular basis pre-pandemic for treks around the city. Fellow LivOn Labs ambassador Sabrina Wieser is also a member.

Running, and just moving around outside, are still a vital part of his daily routine, but as a geriatric and pediatric nurse in New York City during a pandemic, he’s a little busy these days. Most days he works with kids at a pediatric clinic and occasionally sees the elderly in a nursing home over the weekends. He tries to fit in a 30-minute walk after breaking to eat his packed lunch.

“My work life has changed dramatically! Many weeks at a time, I’ve noticed I do get burned out with lack of sleep but I’ve been managing.” Lypo-Spheric® Magnesium L-Threonate has helped.

“I have a hard time sleeping and after a good week of taking the magnesium, I do notice I fall asleep faster and I wake up feeling less tired,” Chinedu says.

Another vital component is heading out for a second run after work to “mentally relax.” While accumulating 25–35 miles every week may seem daunting, running is calming to Chinedu since its been a constant in his life since childhood.

“As far as I can remember I’ve always been running. If not at the park I was racing other kids in my neighborhood. In high school I did track and field which I loved to death.”

After cutting down to just one to two neighborhood jogs a week during college, his passion for the sport reignited after watching the NYC marathon on TV.

“I was like one day I want to attempt this feat. 2-3 years later I ran my first marathon. It wasn’t NYC, but it made me see that I was lot tougher mentally and physically than what I had known,” he says.

He may not be training for any races right now, but as the cliches go, now more than ever, he knows how important it is to maintain those activities that have kept him physically and mentally healthy. Staying in shape to train for eventual races is a huge part of that.

“Being mentally and physically fit has been vital in me staying healthy. life is stressful as it is and this pandemic didn’t help but running and cooking has helped me de-stress and gather my thoughts.”

Working with the young and old, 33-year-old Chinedu sees “life, health, and living” through many different perspectives. That’s why it’s so important for him to spread his knowledge about healthy living habits that work. That includes sharing his knowledge about exercise, nutrition, mindset, and products he believes in, like Lypo-Spheric supplements, on his Instagram account @nedu77.

“Before LivOn Labs, I was not a fan of meds and supplements. Maybe because as a nurse I’m always giving out medication and supplements. But with their products I actually feel the difference and I see the results.”

A global pandemic is no time to be sick. So, Chinedu is running, cooking, drinking plenty of water, washing his hands, arriving to work with several masks, and trying to “maintain a positive attitude no matter the situation,” an attitude which his hopes is more infectious than any disease.

“My goal in life is to instill positive health, fitness and cooking knowledge to others.  I’m not the best but I think I know enough to help others. Running and cooking are my hobbies and I am more than willing to train and give people cooking tips. As they say, health is wealth and I’m trying to maximize as much healthy living as possible.”