Chief Miller: How a Fire Chief Is Refusing to Let Stress + Bad Sleep Destroy His Health 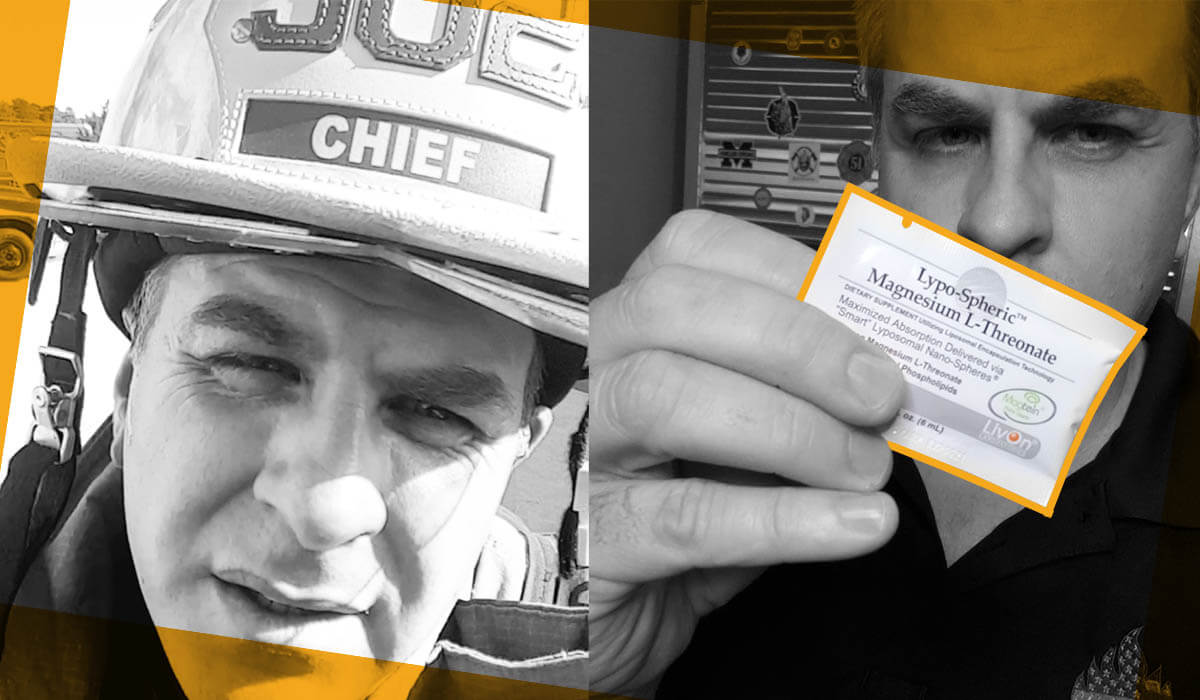 The number one killer of firefighters isn’t fire.

Yes, sending the men and women of his station into the inferno is a major stressor for Fire Chief Joel Miller, but most of these first responders will make it out of the burning building. They are more likely to die from heart disease, the same killer of Americans who sit behind desks and will never walk through flames.

The cardiac problems will progress like in anyone else. The cause won’t be a cataclysmic event, a fire so intense that the heart beats so fast that it seizes. While the roots may be elsewhere, the reason that more firefighters will succumb to heart disease than any other life-threatening condition is the same as the rest of us: an unhealthy lifestyle.

That’s why fire chief and 25-year veteran of the service Joel Miller has committed to changing his life. It’s not easy. A healthy lifestyle requires time. For the men and women of the fire service, whether chiefs of “probies,” time is in short supply.

Chief Miller’s “good week” includes at least 60 hours on duty. The Monday through Friday work week breaks down to four nine-hour shifts and one 24-hour tour of duty at the station. Chief Miller is up at 6 a.m. After popping his LivOn supplements, he’s at the station by 7 a.m. The first meeting starts at 8 a.m., but those staffing, budget, and equipment discussions are subject to delay and cancellation when a call comes in. Lunch, which often consists of a healthy choice from the station cafeteria, can be another casualty of emergency calls. The call, after all, is why Chief Miller is there. It’s also the source of major daily stress. 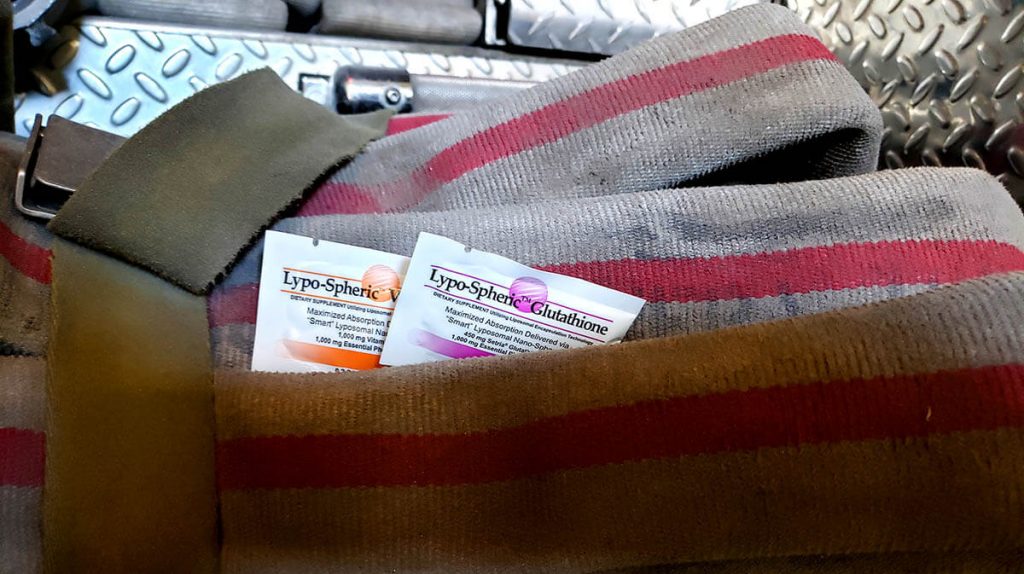 “As Chief, I am responsible for the firefighters that I supervise. Responsible to keep them safe in an unsafe environment. Working for a government facility, I am also responsible for the life and safety of other staff members and visitors, as well as millions of dollars of property and equipment on a daily basis. The thing about the fire service, you just can’t predict what the day may bring. Some days, my stress levels are off the charts,” Chief Miller says.

First responders of all kinds have unique exposure to both chronic and acute stress on a regular basis. Chronic stress is what many of us experience due to high-pressure lifestyle factors: caring for an ill loved one, lower socioeconomic status, difficult relationships, demanding jobs, and lack of time to fulfill all obligations. Acute stress occurs from traumatic events, which can range from divorce to war. Both forms have documented negative long-term effects on health. Researchers have found that the anticipation of a stressful situation, the dread and fear of difficulties to come, can be even more damaging than the stressor itself.

The chronic stress on a firefighter includes lack of time to engage in healthy activities like exercise, sleep, cooking nutritious meals, and just relaxing. For a chief, add in being responsible for the lives of everyone at the station. For a firefighter, how about stepping into extreme danger on a daily basis that most of us will never experience in a lifetime?

Both chronic and acute stress are correlated with the biomarkers of oxidative stress, which is associated with many unpleasantries experienced as we age. Leading by example as a fire chief is wont to do, Chief Miller is spreading the message of health in his station and others he visits all over the nation.

In mid-2019, he vowed to get his health back on track after years of letting lack of time dictate his lifestyle decisions. Grabbing quick snacks, poor sleep, and prioritizing his duties for his firefighter memorabilia brand, Chief Miller Apparel, over exercise and relaxation were catching up to him.

“Last year, I had an eye-opening realization. I hadn’t been exercising as much and not eating as healthy as I had been in the past. I knew this and of course I felt the effects but we always think we have time. That’s when someone reached out to me about helping with a fund raiser for a fire chief that had a heart attack. He was in his 40’s and his name is ….Chief Miller. Talk about an eye-opening, attention-getting moment! He coded and was revived by his crew but ultimately had a long stay in the hospital and may not be able to return to the fire service. I had the pleasure of traveling to meet him and he is a great guy. This put me in check with my own health issues.”

He started training three days a week. With his schedule, daily exercise is still not an option.

“Even when I can’t make it to the gym, I get some form of fitness into my schedule. Get creative like wearing gear when walking or box jumps from the back step of the truck. When there is a will, there is a way.”

While that exercise is helping with stress management, Chief Miller says, “The best de-stressor is down time. One of the great stressors is trying to get down time.”

Since his “downtime” consists of traveling around the country to visit his children in college or other stations to connect with other firefighters, recharging is paramount.

We all know the feeling of being wired and tired. You’re lying in bed, fixated on sleep but it’s not coming because your mind is racing, thinking about all the things that take a good night of sleep to accomplish. Imagine trying to sleep after putting out a four-alarm fire. Cortisol can spike from imaginary stressors and interfere with sleep; real stressors make sleep difficult to come by, especially when that sleep is in a fire station while you’re still on call.

“I personally feel one of the greatest downfalls to the health of a firefighter is we rarely get a good night sleep. This is rarely discussed in regards to health effects of uninterrupted sleep on a regular basis,” Chief Miller says. “I have seen a pattern of sleeplessness. I have seen first-hand the effects this can on our bodies getting up and down and back up again, night after night. Our body gets into a habit of anticipating the next call so we never really obtain good sleep, even when we are off duty. I can’t stress how much this will affect other areas of your health leading to greater complications such as heart attacks, cancer and even the unmentionable suicide.”

Sleep aids are not an option because firefighters must be alert at a moment’s notice in the middle of the night, sometimes multiple times throughout a night. Getting eight consecutive hours is often impossible. The on-call sleep pattern bleeds into off-duty nights as well.

Since his renewed commitment to his health, every night at 10 p.m., Chief Miller pops a Lypo-Spheric® Magnesium L-Threonate to help him achieve a relaxed state. He’s asleep by 11 p.m. He’s been raving about the supplement to his followers on his immensely popular Instagram account @chief_miller.

“LivOn magnesium does not make me feel groggy but allows me to obtain a restful sleep even when I am on duty. I do not have that unwell feeling the next day. Sleep deprivation is when mistakes can happen. In this line of work, we can’t take the risk. I am honestly getting the best sleep I have had in years. I know without a doubt this has helped my health and performance on the job greatly.”

While the number one killer of firefighters is the mundane heart disease, mistakes brought about by being in less than optimal working condition are a major concern.

LivOn and Chief Miller have partnered to spread the gospel of better nutrient absorption to firefighters across the nation. Chief Miller is taking the full antioxidant arsenal to attempt to assuage some of the oxidative damage from “years of being a smoke eater.” 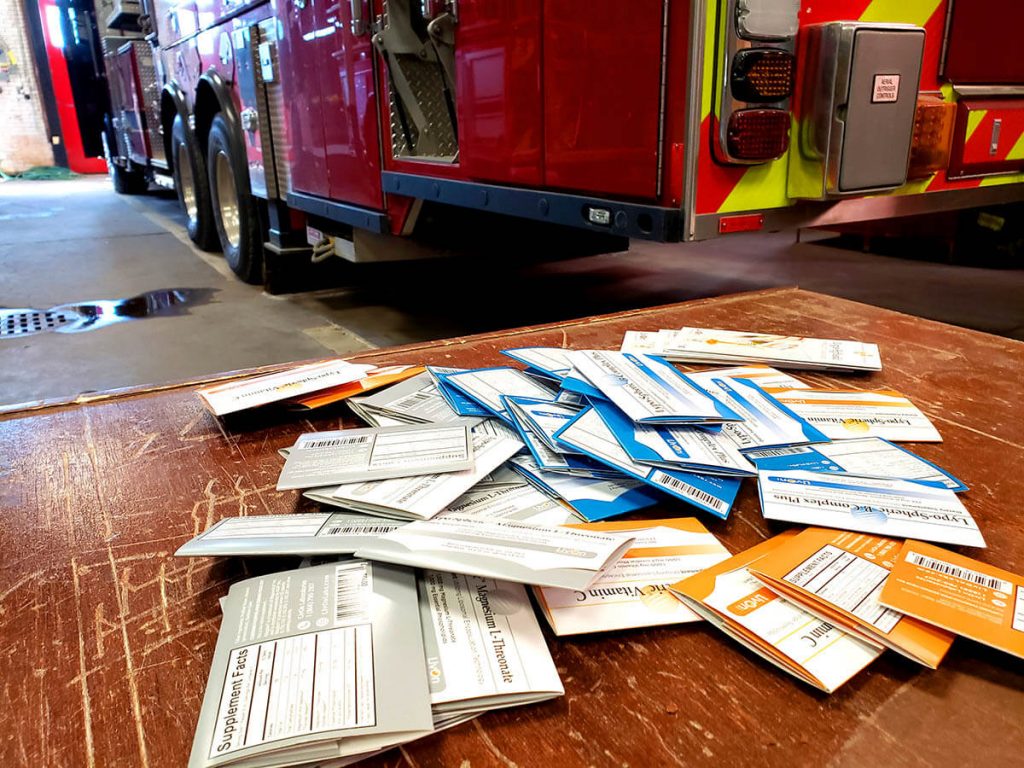 Chief Miller has always taken his vitamins. The fire industry is proactive in informing and educating the service on prevention, but the lifestyle isn’t often compatible with making the best decisions on a daily basis. Chief Miller knew that most vitamins and supplements aren’t absorbed — his friend that owned a port-a-potty business joked about pressure washing vitamins away during routine unit cleaning — but he didn’t experience what that meant practically until he started taking the Lypo-Spheric® supplements in the summer of 2019.

“LivOn has been a game changer for me and my health,” he says “Energy levels are better and last longer, weight loss and definitely better sleep. Better sleep also effects my focus throughout the day. I find that I am not falling asleep when I try to watch TV. My wife has even noticed that I am more focused and not as tired.”

Chief Miller doesn’t want any of his firefighters to go out in a blaze of glory. That would mean he failed. And he definitely doesn’t want any of them, or himself, to put themselves in a position to fall victim to the stress- and lifestyle-induced conditions that claim too many lives.