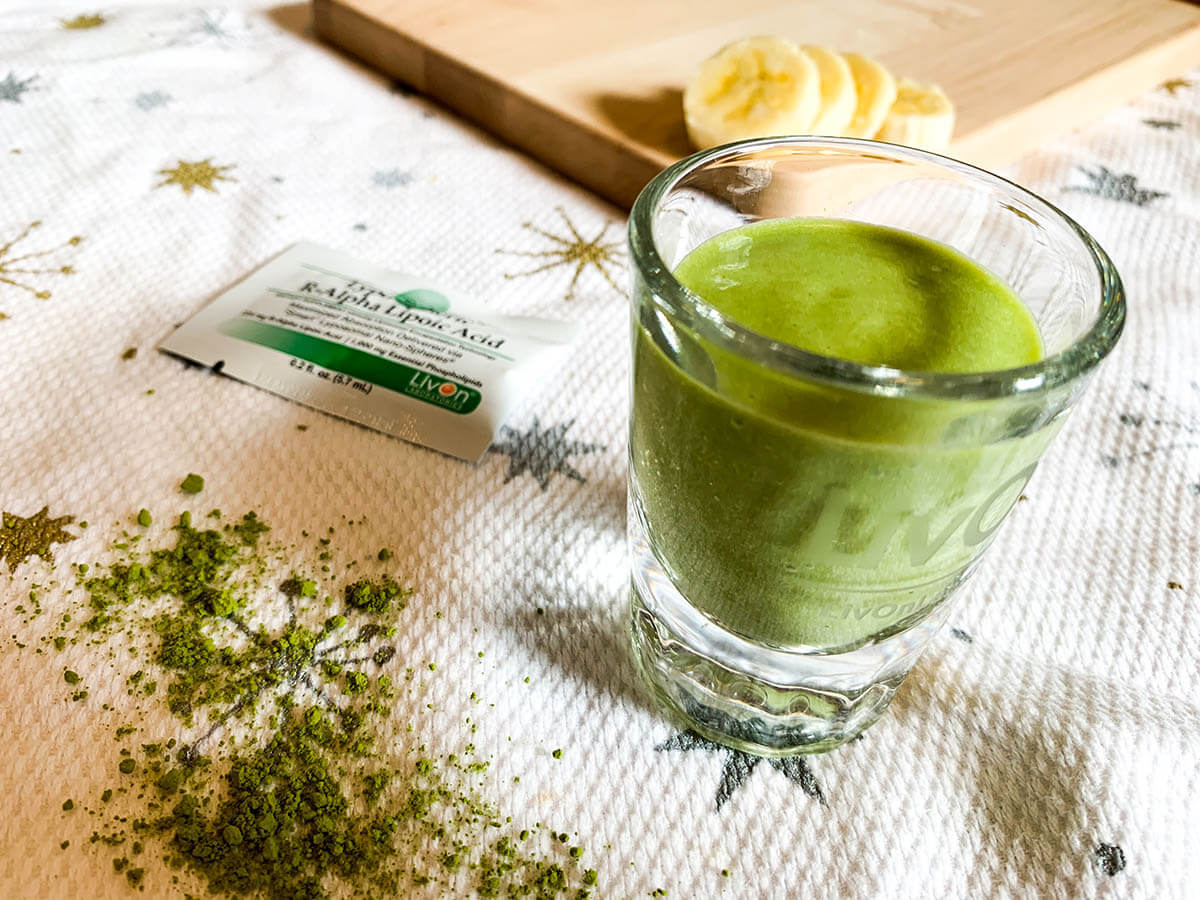 Maybe you didn’t shotgun a green beer, but you had a couple Irish whiskeys at the party last night. So smooth on the way down. Gotta replenish that glutathione. Opening the Lypo-Spheric® Glutathione packet brings you back to that time when the class clown cleared out the high school hallways with the stink bomb. Olfactory armageddon. That whiskey won’t be so smooth on the way up. So, how to replenish the glutathione stores that the whiskey depleted without depleting yourself of last night’s corned beef?

This delicious, non-vomit-inducing smoothie recipe incorporates nutrients known to support glutathione production and the odorless Lypo-Spheric® R-Alpha Lipoic Acid. It’s also a great way to rehydrate after a party while continuing the Irish pride in a green drink that replenishes rather than depletes glutathione.

“Chronic inflammation can contribute to oxidative stress and deplete glutathione supply,” write the authors of a 2019 literature review detailing methods to increase glutathione levels. Because omega-3 fatty acids are anti-inflammatory, numerous research teams have witnessed a relationship between them and glutathione levels.

Salmon is rich in omega-3 fatty acids and a study showed that consumption was related to higher glutathione levels. But, we recommend the avocado for this particular smoothie. Unless, of course, you invested in the Super Bass-o-Matic ’76…

B vitamins for glutathione conversion

Glutathione is only useful in its reduced state, in which it carries extra electrons to neutralize free radicals. The process to convert oxidized glutathione to reduced glutathione requires Vitamin B2, riboflavin. Other research suggests that B5, pantothenic acid, and B12, cobalamin, are important for maintaining glutathione levels.

Avocado is rich in riboflavin and pantothenic acid, while whole milk provides B5 and B12. Banana, which is working along with the whey as a sweetener for this smoothie, is also a solid source of riboflavin.

Glutathione is a combination of three amino acids: glutamine, glycine and cysteine. Amino acids are the precursors of proteins, so they are easy to find in protein-rich foods. Researchers have found that low protein intake can correlate with lower glutathione levels.

Whey protein is a reliable source of all three of those amino acids. And, it’s a superior protein for a shake, without going Super Bass-o-Matic ’76 style.

Cysteine is the “rate limiter” for glutathione production as it can be in short supply. While oral cysteine doesn’t make it through the digestive tract, supplemental cysteine like that found in whey protein has been shown to raise cysteine levels. Numerous studies confirm that whey protein supplementation increases glutathione levels in people of various health statuses.

If you’ve had our glutathione, you know from the smell that glutathione is bound to sulfur. As the literature review authors write, the “green foods” could be of particular help in “eating a glutathione-supported diet.” These foods are rich in sulfur which carries glutathione. Glutathione Replenisher ingredients bananas, avocados, and spinach are on the list.

In a study of obese patients with metabolic syndrome (both conditions which are associated with depleted glutathione), those administered green tea had significant increases in “plasma antioxidant capacity and whole blood glutathione.”

We used matcha powder for this recipe because of its concentrated nutrients as well as taste. Be warned though that matcha contains caffeine, so this is definitely not a nightcap.

How to Make the Glutathione Replenisher 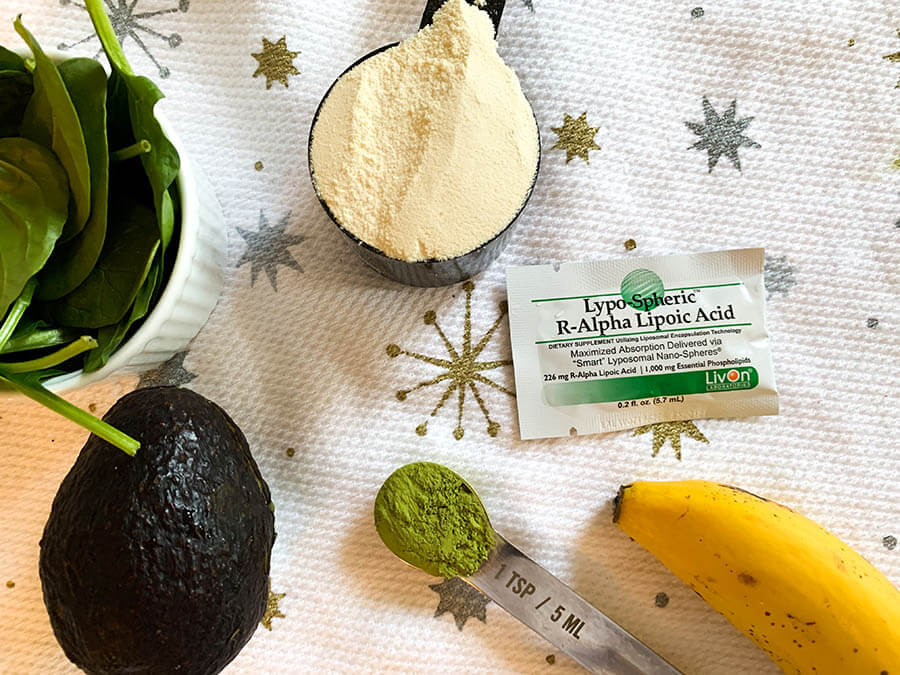 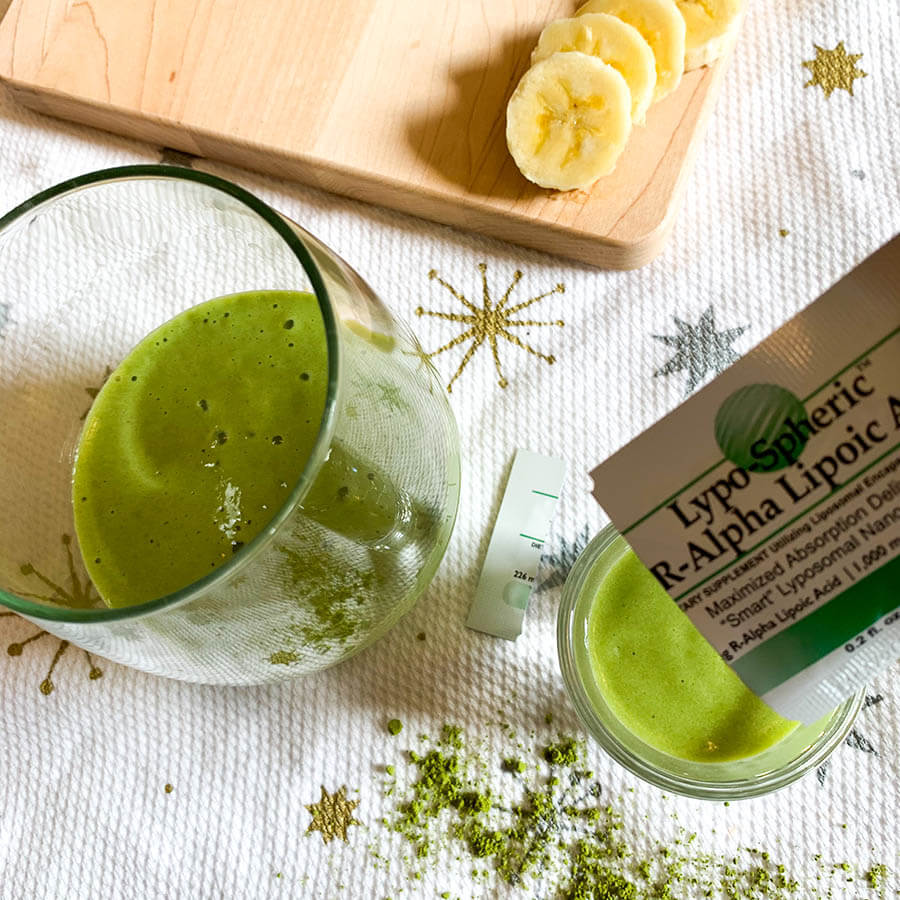